While the metro isn't always a good option to visit the main tourist attractions, it is a useful and quick way to make long-distance journeys.

The Los Angeles metro is made up of 6 lines, although it's expected to be extended in the next few years.

To use the metro you need to buy a TAP card, which costs around 1 to 2 dollars (depending on where you buy it), and which can be topped up as many times as you want. You can only buy one card per person.

Children under 5 travel for free. 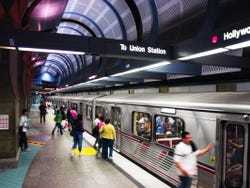