As well as being an idyllic beach on the Californian coast, Zuma Beach offers a range of advantages such as not usually being as crowded as other beaches, having showers and a large car park. The rate costs US$ 8 per day.

Zuma Beach is also known for its appearance in the iconic show Baywatch and other famous movies such as "The Planet of the Apes" and "An Indecent Proposal". 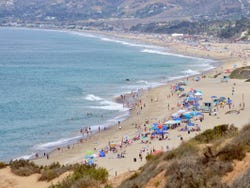 To the West of Los Angeles, in Malibu.