The Chinese Theatre was the masterpiece of Sir Grauman, an ambitious businessman who took a trip to China and fell in love with its culture. Grauman already had experience in the sector, as in 1922 he built the Egyptian Theatre, located just a few metres down the road.

After 18 months of building work and a budget of 2 million dollars (a huge amount at the time), the Chinese Theatre opened its doors on 18th May 1927 with the premiere of the film "King of Kings". Following its opening, the film industry officially moved from Downtown Los Angeles to Hollywood.

The construction of this huge pagoda was supervised by poet and director Moon Quon, who travelled from China for the occasion, and all the materials used for the construction were brought from China. One example is the huge "chinese heaven dogs", half-dog, half-lion, belonging to the Ming Dynasty, which guard the entrance of the theatre.

Since its creation, the Chinese Theatre has undergone many renovations and, without forgetting its historic origins, has the best technology in the world (for example, in 2013 it became the largest IMAX cinema in the world).

It is currently visited by over 4 million people a year.

From 1944 to 1946 it was the venue for the Oscars, being the first theatre to be awarded this honour, as until then they had only been held in hotels.

Some of the most famous premieres that have taken place in the Chinese Theatre have been Star Wars: Episode IV, A New Hope (1977) and The Wizard of Oz (1939).

Outside LA's Chinese Theatre, you can find hand and footprints of over 200 celebrities, including Sir Grauman (the creator), Shirley Temple, Sophia Loren, Jackie Chan and Marilyn Monroe.

Interestingly, this tradition is said to have started when Norma Talmadge accidentally stepped into wet concrete, although it was later claimed to have been Grauman himself.

The Chinese Theatre is magnificently decorated in gold and red with elaborate, regal designs. If you're a film lover don't miss out on the chance to visit the most famous cinema in the world- it'll take your breath away!

To visit the Chinese Theatre you have two options: buy a ticket to see a movie or go on a guided tour. Both options allow you to admire the incredible auditorium and its entrance hall, which exhibits items from movies of all decades.

The guided tour takes place every 30 minutes from 10 am to 4 pm. It's 30 minutes long and is carried out in English (may vary depending on the day). You can buy your ticket at the theatre itself (it is not usually very busy) or online (http://www.tclchinesetheatres.com/vip-tours), where special offers are sometimes available.

Since the theatre is closed when there is an event (which is quite common), we recommend calling in advance to check if the tour is still on (telephone: (323) 463-9576). 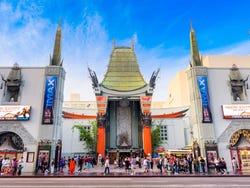 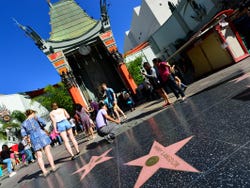 Stars outside the TCL Chinese Theatre 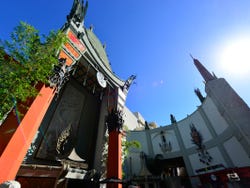 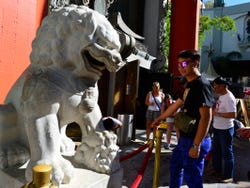 Lion at the TCL Chinese Theatre 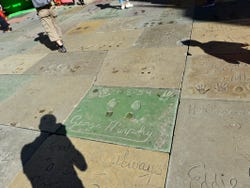 Famous outside the TCL Chinese Theatre 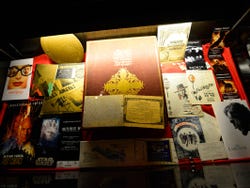 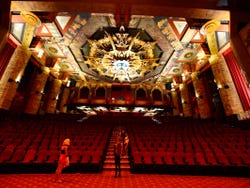 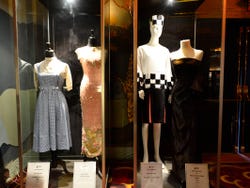 Costumes at the TCL Chinese Theatre

Varies depending on the day. It's a good idea to check in advance.